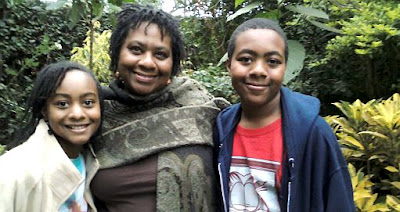 One evening, shortly after moving into our new home, I was cooking dinner when my cell phone rang…

Me:  “Hello”
Kamau:  “Honey, I see a baboon outside on one of the rooftops!”
Me: “No way, really?!”
Kamau:  “Yeah, come see”
So I called the children and we gathered outside of our house hoping to see this most unusual sight in urban Nairobi.  We looked and looked but he had gone.
Kamau:  “I saw him climbing around and I was afraid he was going to fall.”
Me:  “I wonder how he got there.”
Kamau:  “I don’t know, maybe someone is keeping him as a pet or he escaped from the game park.  Anyway, do you see? This is how rooftops become damaged here in Nairobi!”
Me:  “Yes, I would think so.”

Hmm……. there really is so much to see and hear in this vibrant city where your senses come alive with excitement.  It is teeming with people from many tribes and nationalities; people from different parts of East Africa; Somalia, South Sudan, Uganda, Ethiopia, and Tanzania as well as places in Asia and the Middle East. There are many languages being spoken even as one is in crowd of people, which in Nairobi, is anywhere you go.  It feels very exotic to me and I feel grateful to have the opportunity to live in the country of my husband’s birth and to serve the Lord here.

After living in a rural area in Zambia for 5-1/2 years and in a suburban area in the US before that, living in a major urban population center is somewhat of an adjustment to say the least.  I enjoy being in close proximity to stores and to be able to visit a local kiosk selling a variety fresh tropical fruits and vegetables at anytime. The industry and ingenuity of the Kenyan people is admirable to witness.  There are many little businesses operating from the side of the road, anything from simply roasting maize on a homemade grill, to all types of furniture displaying excellent craftsmanship.

What has been most challenging for me so far is the public bus transport, called matatus.  As an American, I don’t know where we got the idea of having “personal space,” but it sure becomes a troublesome way of thinking when you are riding in a matatu.  My mind loudly screams in protest that my personal space is being violated beyond all that is bearable when half of a total stranger’s body is hanging over my face or a limb of some sort is overlapping onto my own.  I try not to even think about the speed at which the mataus are going, the fact that we are driving on the sidewalk at times and the oncoming vehicle that we just narrowly missed.

Crossing the road has once again become a challenge, even at 47 years of age.  The last time I felt this way was in elementary school I am sure, but now I am feeling the apprehension that a small child would feel walking along a busy highway and trying to cross it.  My husband has to hold my hand firmly and tell us when it is safe to cross because the traffic is so heavy and pedestrians are not given the right of way.

Oh well, the positive side to these challenges are that opportunities to pray without ceasing are increasing! 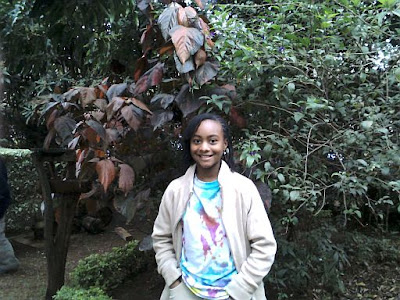 Hi! I'm here in Kenya and things are going okay here, I guess.
We don't have a car right now so we have to catch matatu's (buses) and sometimes they can be crazy. They go pretty fast too. But those things don't really bother me that much. Probably cause' I myself am a little crazy and wild.
We have to walk a lot also, which is NOT fun when you're hot and tired and if you don't like walking really far distances. Fortunately, we haven't had to walk really far distances, at least Kimani and I haven't. I don't know about my parents.
There are times I do like going out for walks (not really far ones though), just going out of the house once in awhile.   I like going to the movie theater and stuff.

When I'm on buses or walking, sometimes I smell the smoke from the cars and trucks and buses, and they do not smell nice. Sometimes it makes my stomach hurt and it's not nice having a stomachache out in public where you can't lay down.

I like living in the city. Walking around places, catching matatu’s, stuff like that. But when my parents start teaching me how to catch a matatu by myself, it’s probably going to be creepy because I don’t really want to end up in another part of Nairobi.
But I do like the scenery in some places and going out for a little bit, and my cousins are here so we get to see them once in a while.

Well I guess I will see you later.

Prayer Closet
**A huge answer to prayer is that Kamau arrived home safely from Zambia after going there to retrieve the rest of our belongings. 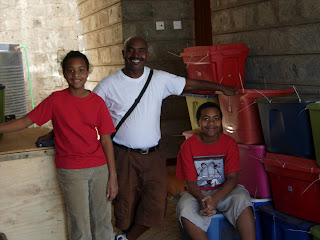 **As we turn our attention to our new ministry in Kenya, pray that God will lead us to the location for the children’s center within the slum.  As soon as we find a place and get it ready, we can begin having Bible clubs.

**We also in need of wisdom as we approach leaders with the community in which we will be serving.  Pray that God will lead us to like-minded Christians and people within the community that could aid us in reaching out to the children and parents within the slum
.
** Join us in praying for peace between Christians and Muslims.  There are terrorist elements that would like to stir up animosity which can lead to violent reprisal acts.